ROD STEWART appeals to several generations, from 15 to 70, all ages have their favorite ROD STEWART hit. He has crossed all major musical boundaries, influencing people from all walks of life.

Rob Caudill & The Tonight's The Night Band will perform hit after ROD STEWART hit!! From "Maggie May" to "Passion" and all the other great Rod Stewart Hits you have come to love!  This show will have you  believing this is The ROD STEWART!!

"Rob's voice and look is unbelievable, it is like looking at Rod Stewart himself!"
....John Entwhistle (of "The "Who")

"Rob IS Rod! No doubt about it. This is one impersonator that will make you do a double take. He is that good!"
....Joe Walsh (of "The "Eagles")

People stop Rob Caudill in airports for autographs. They stare at him in restaurants. And when he struts on stage, people scream themselves hoarse. Why? Caudill is a dead-on Rod Stewart Tribute Artist! With spiky blonde hair and leopard skin coat, this singer has carved out a career recreating Rod Stewart. From kicking out soccer balls and spinning mic stands in his high energy show to belting out all of Rod's greatest hits, it's a must-see show for all ages! 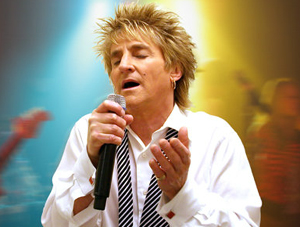 ROB CAUDILL, featuring The Tonight's The Night Band, is undoubtably not just the next best thing to a ROD STEWART concert, but just like a ROD STEWART concert! ROB CAUDILL has "The Look" and the Uncanny Vocals that come naturally. The Costuming, The Smokin' High Energy and The Illusion (or is it an Ilusion??), coupled with the outstanding musicianship of ROB's band make this a show that always leaves the crowd screaming for more!!